BlackBerry is Withering: Downfall of Not Staying Relevant 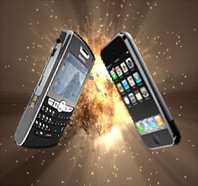 According to a recent article in the New York Times (“RIM Suffers as Profit Falls 58.7%,”Sept. 15, 2011), Research in Motion (RIM), maker of the BlackBerry smart phone, recently announced disappointing earnings results. The company’s shares lost 19% of their value, and many Wall Street analysts are saying that the future viability of the company is in doubt.

Just a few years ago, RIM was one of the most-admired companies in the mobile phone world. They basically invented the smart phone as we know it today – the BlackBerry was the first phone that also allowed people to check their e-mail, becoming known as the “CrackBerry” for its addictive properties. RIM’s reliable and secure systems made the BlackBerry popular with corporate IT departments, enabling companies to keep their people connected even when away from the office.

But after the iPhone was introduced in 2007, RIM failed to adapt to a fast-changing market. Even though BlackBerry was the first modern smart phone, and RIM basically invented the category of smart phones, most people today probably think of the iPhone as the prototypical smart phone.

Why BlackBerry and RIM are losing their way, and the lessons other companies can learn from RIM’s difficulties:

I am a BlackBerry user, and in fact I just bought a new BlackBerry Bold, and I like it a lot. So I am not rooting for RIM to fail, by any means. There are still signs of hope for the company – RIM still has over 65 million subscribers and preparing to release a new generation of phones based on its QNX operating system. Perhaps RIM can defy the expectations of analysts and find a way to survive. But ultimately, this story shows the rest of us, especially in the tech sector, how fast the world can change. No company can afford to rest on its laurels or coast along based on its past success. We all need to continually adapt and innovate to make sure our products are relevant to what customers want to buy.