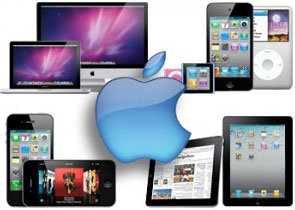 Apple’s Macintosh desktop and laptop computers have enjoyed near-cult status among devoted users since the 1980s, but it wasn’t until the new millennium that the company began hitting a series of bona fide home runs with consecutive new product launches. It began in 2001 with the iTunes media player, which was followed later that year by the iPod digital music player and the online iTunes store in 2003. Then came the unveiling of the revolutionary smartphone in 2007 – the Apple iPhone, and then the iPad in 2010. Each product was hyped to the max, sleek in design and coveted by consumers around the world.  Apple stock prices began a steady climb, reaching a peak of $700 per share in the fall of 2012. Since then, however, Apple’s stock has been in decline and is now hovering in the humble (for Apple) $400s, causing many analysts to speculate: is Apple’s reign coming to an end?

I don’t believe so. There’s more to Apple’s enduring competitive advantage than advanced product design, but many elements are not obvious to the untrained eye. Here’s what fosters Apple’s leading edge:

Highly Integrated Product Range. It’s no secret that each of Apple’s individual product offerings are top-notch. But as theInternational Business Times recently highlighted, one of the secret elements aiding Apple’s competitive advantage is the integration of different products into a suite that draws users into an entire ecosystem of consumer electronics that interface seamlessly onto one platform. Once a consumer has purchased one of Apple’s products they are much more inclined to try others that will complete their set. Example – following the viral success of Apple’s iPhone, why wouldn’t a consumer want a laptop computer that flawlessly migrates and stores the data kept on the handheld device that supports their everyday living? It almost seemed aberrant to consider a different brand. Ever wonder how Macintosh computers went from only being purchased by a devoted few to ranking third in personal computer sales?

Moreover, when it comes to adding new products, Apple is also a firm believer in saying “no” more often than “yes.” Unless the company is fairly certain that the new product will fit nicely into their current mold and ensure a huge market disruption, it won’t grant the green light.

Effective Supply Chain Management. How does Apple manage to meet the staggering demand for its new products without a single hitch? By investing substantial sums of cash into ensuring its supply chain runs flawlessly. Tim Cook, who took over as CEO after Steve Jobs passed away, previously managed Apple’s supply chain and therefore understands its critical role in their competitive advantage.

As noted by MSN Money, Apple arranges very specific deals with suppliers to foster seamless operations. The details of which include purchasing necessary equipment for suppliers as long as they guarantee to meet Apple’s schedule and share any cost savings incurred from the new equipment by lowering component prices. Apple essentially removes or greatly minimizes the risk factors from the supplier side of the equation, and as long as both parties fulfill their roles, it is a win-win relationship.

Innovative Internal Organizational Structure. The Huffington Post pointed out that Apple’s internal organization vastly differs from most consumer electronics companies. Competitors tend to organize their companies into distinct business unit silos, each with their own research and development (R&D) efforts as well as profit and loss (P&L) statements – essentially setting the pace for internal competition. Apple, on the other hand, encourages a positive workflow by employing a unified R&D effort that cuts across most of their products, and only looks at a single P&L statement. When one department succeeds, it is reflected throughout the entire organization rather than just a single unit. This organizational structure strongly supports the veritable fortress Apple has built around its highly integrated product offerings.

Apple has yet to release the type of ground-breaking product we’ve come to expect since Cook took over as CEO – and many wonder just how strong the tie was between Apple’s success and Jobs’ leadership. However, as history has proven – a company that focuses on its competitive advantages ensures long term success rather than limited improvements to the bottom line. Case in point: if Cook can continue to improve the operational aspects that strengthen Apple’s enduring competitive advantage, such as those outlined above, growth and success will keep the company at the forefront for years to come.