6 Reasons Why BlackBerry is Losing Their Competitive Advantages

In the past 12 months, BlackBerry (and its parent company, Research in Motion) seem to have lost their way. It seems that they got carried away with innovation at the expense of what really matters most to the customer’s buying decision. Too often with tech companies, they keep trying to add more technical “bells and whistles.” The problem is, if the “bells and whistles” over-complicate the product and are not valued by the customer, and if customer service gets sacrificed in order to pay for all the new bells and whistles, then no amount of new product innovation will matter, because the bad service has a shadow effect on everything else. 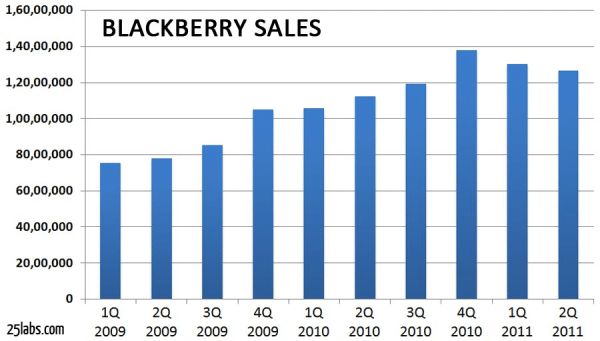 Examples of how Blackberry is losing relevance and their key competitive advantages:

This story is an example of how when competitive advantages go away, the negative momentum can become a self-fulfilling prophecy, especially in the fast-paced technology sector. Once the iPhone and Android came around, all of a sudden BlackBerry’s key competitive advantage went away, and RIM never adapted fast enough to meet the changing needs of the market.

Is there any hope for BlackBerry and RIM, or is it too late for them to recover?

One area of optimism is that BlackBerry still has a significant foothold with corporate customers – rather than individual consumers. Perhaps RIM can make a “last stand” by focusing on the enterprise market. This is a big plus for them, as RIM still has big market share and credibility with this audience.

I wonder if RIM has conducted any customer research to go deeper into why their business customers still choose to buy from them? For example, is there something that BlackBerry offers that is uniquely well-positioned for enterprise use?

From our experience, many companies don’t do this – or even if they spend the money on customer research, they don’t listen to it. Many companies unfortunately ignore the voice of their customers – do you?